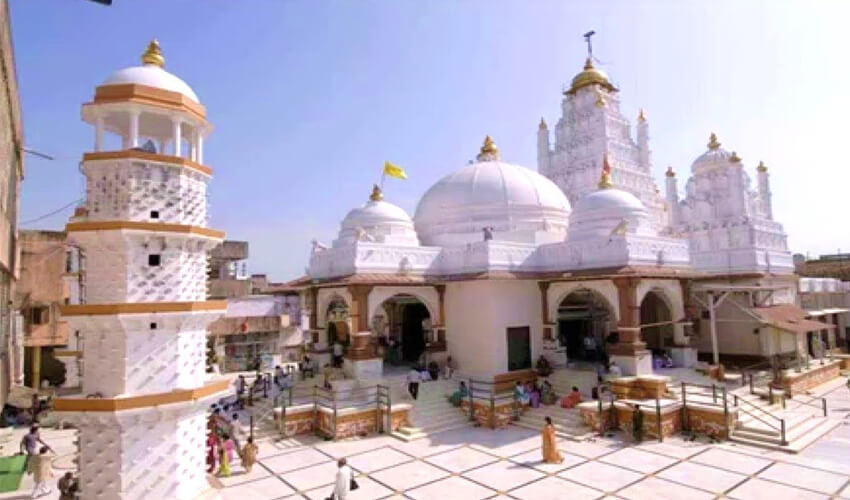 The present Dakor owes its raison not to Dank Rishi but to Bodana, a great devotee of Lord Krishna. In his previous birth, he is supposed to have lived in Gokul and been a cowherd called Vijayanand. On one Holi day, all the cowherds except Vijyanand worshipped Lord Krishna. His wife too worshipped Lord Krishna. But Vijayanand was proud and stayed at home. Lord Krishna came to his house in disguise of his friend and sent him to perform ‘Holi’ puja. Coming back, he realised that his friend was none else but Lord Krishna. Next day they fought a battle of colour. Lord Krishna lost and fell into the river. Vijyanand went after him where Lord Krishna revealed his true self. Vijyanand begged forgiveness. Lord Krishna took pity on him and solaced him with a boon that he would be born in Gujarat again in Kaliyug after 4200 years as Vijayanand Bodana in the house of a Krishatriya and his present wife Sudha would again be his wife, called Gangabai, when he will give them a glimpse (darshna) and relieve them by offering them emancipation (Moksha). So as the legend would have it, ‘Vijayanand Bodana’, a rajput of Dakor, becomes a staunch devotee of Lord Krishna. He used to let the basil plant (Tulsi) grow in an earthen pot with him on his palm and used to go every six months to Dwarika to worship Lord Krishna with the said Tulsi leaves . He did this continuously, unfailingly and untiringly till he was 72 years he then began to find it increasingly difficult to pursue this ritual. Seeing his plight, Lord Krishna told him that on his ensuing visit to Dwarika, he should bring a bullock-cart with him and Lord Krishna would accompany him to Dakor as he was exceedingly pleased with his devotion. Accordingly, Bodana went with bullock-cart to Dwarika. The hereditary priests of Dwarika (Gugli brahmins) asked him as to why he had brought a cart with him. Whereupon, Bodana replied that he had done so to take away Lord Krishna. Looking to the ramshackle cart, they did not believe him but nevertheless locked and sealed the sanctum sanctorum of Dwarika Temple for the night. At mid night, Lord Krishna broke open all the doors, awoke Bodana and told him to take him to Dakor. Shortly afterwards, Lord Krishna called upon Bodana to rest in the bullock-cart and drove the cart himself till reached the vicinity of Dakor. Here (near Bileshwar Mahadev on Dakor-Nadiad road) they rested for some time, touching and holding a branch of neem tree. He woke up Bodana and asked him to take over. Since that day, this neem tree is found to have one sweet branch though the rest of the branches are bitter and it forms the subject of a well-known Gujarati song (bhajan). In Dwarika, the Gugli brahmins finding the image missing chased Bodana and came to Dakor in pursuit. Bodana was frightened but Lord Krishna told him to hide the idol of the deity in the Gomti tank and meet the Guglis. Accordingly, Bodana hid the idol and went to meet the Guglis with a pot of curd to pacify them. They became angry and one of them threw a spear at him. He fell down dead While hurting Bodana with a spear it also hurt the image of the deity hidden in Gomti tank and the water turned red with Lord Krishna’s (Ranchhodraiji’s) blood. It is said that even today the earth of Gomti tank where the image lay is red while rest of the tank is of brown mud. In the midst of Gomti tank, over the place where Lord Krishna was hidden, a small temple having the Lord’s foot-prints is constructed and this temple is linked with the bank of Gomti Tank by a bridge. Even with the death of Bodana, the Guglis were not appeased. Requesting Lord Krishna to return to Dwarika, they sat on the bank of Gomti tank and went on a hunger strike. At last, Lord Ranchhodraiji (Krishna) directed Gangabai, wife of Bodana, to give gold equivalent of his weight and ask the Guglis to return to Dwarika. Poor lady, the widow of Bodana, was a pauper and could not afford doing so. By a miracle, the idol became as light as a golden nose-ring (1, 1/4 val i.e.1/2 gram in weight) which was all that the widow of Bodana, Gangabai, had . The Guglis were disappointed but the Lord mercifully directed that they would find after six months an exact replica of the idol in Sevaradhan Vav (well with steps) at Dwarika. The impatient Guglis looked for the idol sometime earlier than they were told and as a result, found an idol which, though similar to the original one, was smaller, Pilgrims to Dakor still visit the places stated to have been associated with the legend viz. Where the branch of neem tree under which Lord rested while coming to Dankpur subsequently turned sweet; where the idol was hidden in the Gomti tank; whereon the balance was set up to weigh the original idol which Bodana had enshrined.

Shri Gopal Jagannath Tambwekar approached Peshwas and Gaikwars and requested them to grant lands for the maintenance, (puja, worship, prosperity, naivedya and services and ceremonials etc) for the expenses of the deity from the State . Thereupon, Peshwa Madhavrao Ballal Pradhan, Peshwa of Poona granted the entire village of ‘Dakor’ of Taluka Thasra, District Kaira and Damaji Gaikwar’s son Sayajirao Gaikwar of Baroda granted in Inam (Offered as prize) village ‘Kanjari’, Prant Madhudha of Gujarat. At that time i.e. in 1769 A,D. half of Kaira District was with Peshwas of Poona and half was with Gaikwars of Baroda. At present, village Kanjari is in Nadiad Taluka of Kaira District. The two entire villages of Dakor and Kanjari were given in Inam to Shri Gopal Jagannath Tambwekar hereditarily for the services of the deity, Shri Ranchhodraiji. Both these villages are known as Dakor Sansthan. Sansthan Scheme was framed in the Year 1879 for the necessary, essential and entire expenses, services and ceremonials of the deity Shri Ranchhodraiji and Goddess Laxmiji which were exclusively met with from the fixed income of the revenues of the two villages of Dakor and Kanjari and was later on registered as a Public Trust. It is the original foundation trust of Shri Ranchhodraiji Maharaj. Since 1905, the management of the temple rests with the Temple Committee. In pursuance of a decision of the Privy Council, Dakor Temple Scheme was finally approved by the Privy Council in 1916. In 1952, it was registered as a Public Religious Trust. Thus the Temple Trust is not administered by the Government, but a Committee consisting of vaishnav devotees of Lord Krishna conducts its day to day administration under the supervision of Manager as per the provisions laid down under the Dakor Temple Scheme. The Committee consists of three nominees of the District Court from Vaishnavas . one hereditary representative of Tambwekar family and one from the Sevaks (priests). The priests are of three sub-castes of Brahmins, Tapodhan, Khedaval and Shrigod. At present families of these priests are about 232 in number. The term of the trustee expires every ten year. Temple committee also maintains a Gaushala. It’s strength is round about 1200 cattle. Cows are not sold. They are maintained throughout their lifetime. Bulls are given free of cost to needy Gram Panchayats for breeding purposes. Milk of the cows is utilized for the purpose of the deity and the surplus is disposed off by turning it into curd-butter milk and distributing it free of cost amongst the inhabitants of the town and vaishnava visitors and padyatris during full-moon days . The Temple Committee intends, making the temple self-supporting for its daily requirements of ghee, in preparing food articles as offerings to the deity and has chalked out a plan for increasing the strength of the cowherd from 600 to nearly 4000. Keeping this in view, the grazing land of 1800 acres at present at the disposal of the Temple Committee will fall short. It is also planning to construct a new Gaushala Complex with all necessary facilities. The cost would approximate roughly to rupees ninety lakhs at the present rates. Out of the net surplus of total yearly income after deducting the expenses for bhog, prasad, naivedya and establishment fifty per cent is distributed amongst priests’ families and remaining percent is carried over to the reserve fund . Fixed properties, trust funds, ornaments, utensils and dress of the deity are carried over to Capital. The temple has an annual income of over one crore of rupees and the expenses are also round about the same amount. The accounts are statutorily audited by an approved firm of Chartered Accountant and submitted to the Charity Commissioner and District Court The Temple Committee also administers its two sister Trusts namely, (1) Shri Ranchhodraiji Maharaj Mandir Gaushala Trust and (2) Thakorpura Trust. Donations, received by Shri Ranchhodraiji Maharaj Mandir Gaushala Trust are exempted under Section 80 G of income Tax Act.