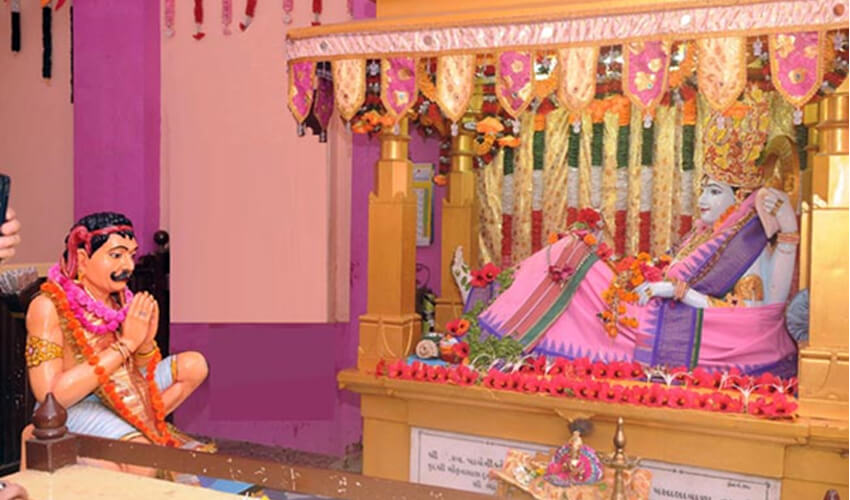 11 his mouth a mighty snake, the thousand headed Naga, Ananta, and glided away to ocean. Ocean himself and the sacred rivers and many divine Nagas came to meet him.

Death of Krishna : Thus Krishna beheld his brother depart from human world, and he wandered alone in forest. He thought of Gandhari’s curse and all that had befallen, and he knew that the time had come for his own departure. He restrained his senses in yoga and laid himself down. Then there came a hunter that way and thought him a deer, and loosed a shaft and pierced his foot; but when he came close the hunter beheld a man wrapped in yellow robes practicing yoga. Thinking himself an offender, he touched his feet. Then Krishna rose and gave him comfort, and himself ascended to Heaven.

The place where Jara hunter pierced Krishna’s foot and Krishna ascended to Heaven is known as Bhalka Tirtha situated in Prabhas Patan (Verawal).

Arjuna went to Dwaraka and brought away the women and children of the Vrishnis, and set out for Kurukshetra. On the way a band of warriors attacked the cavalcade and carried away a great part of women. Arjuna established the others with the remnants of Krishna’s descendants in new cities; but Rukmini and many others of Krishna’s wives became Sati, burning themselves on pyre, and others became ascetics and nuns. The waters of ocean advanced and overwhelmed Dwaraka so that no trace remained.111