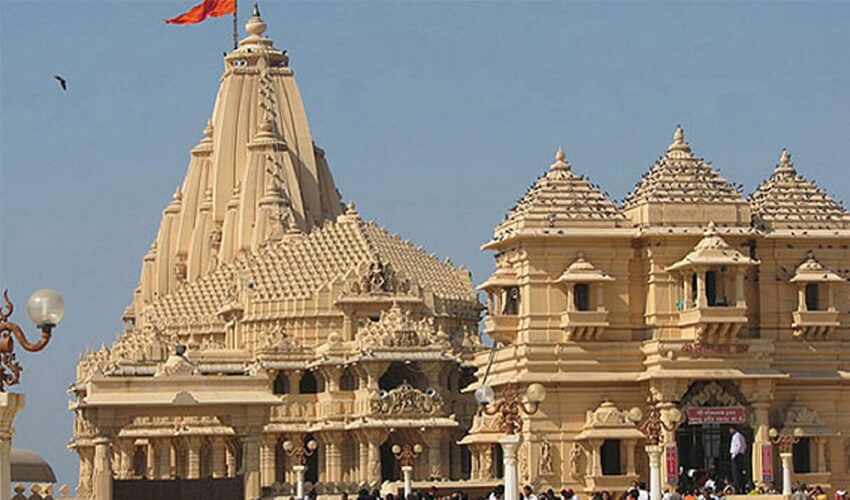 The main temple at Dwarka, situated on Gomti creek, is known as jagat mandir (universal shrine) or trilok sundar (the most beautiful in all the three worlds). Originally believed to be built by Vajranabh, the great grandson of Lord Krishna, more than 2500 years ago, it is a glorious structure seeming to rise from the waters of the Arabian Sea. Its exquisitely carved shikhar, reaching 43 m high and the huge flag made from 52 yards of cloth, can be seen from as far away as 10 km. The grandeur of the temple is enhanced by the flight of 56 steps leading to the rear side of the edifice on the side of the river Gomti. The temple is built of soft limestone and consists of a sanctum, vestibule and a rectangular hall with porches on three sides. There are two gateways: swarga dwar (gate to the heavens), where pilgrims enter, and moksha dwar (gate to liberation), where pilgrims exit.
The lower part of the Dwarkadhish temple is from the 16th century and the soaring steeple with its numerous clusters of small towers is from the 19th century. The main part of the temple has five storeys, reaching to a height of over 100 feet. The exquisite carvings on its exterior display daring eroticism, a multi-layered mythic intensity and extraordinary continuity of design. In contrast, the interior of the temple is striking in its simplicity, with the only exception being the elaborate ornamentation around the shrine to the idol of Dwarkadhish.
Inside, the sanctuary is a hive of voices, colors, incense and movement. With faith, for many it can also transform into a space of inner silence and unity with the divine.