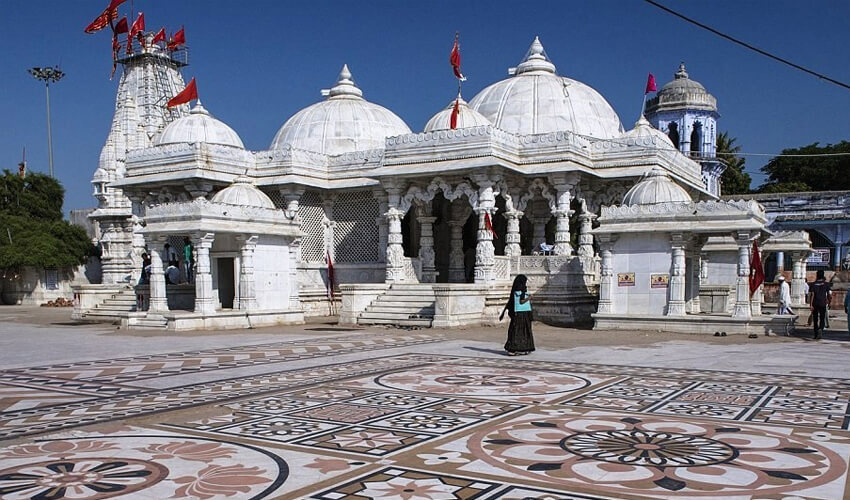 Shakti Mata was reincarnated as Sati in order to marry Shiva. She was born to Daksha who did not approve of the union but she went ahead and married the Lord. Daksha once organized a grand yagna and pointedly did not invite Sati and Shiva. Sati, however, went to the Yagna and was ignored by Daksha who even went out of his way to insult her and Shiva. Ashamed, Sati jumped into the fire and immolated herself. Shiva was furious and sent Virabhadra, one of his manifestations, who wreaked havoc and cut off the head of Daksha. An enraged Shiva carried off Sati while performing Tandava, the dance of destruction. The Gods trembled and prayed to Lord Vishnu to do something which he did with his Sudarshana Chakra, cutting off the body of Sati into small parts which scattered on the Earth giving rise to 55 shaktipeeths in India. Becharaji is where her hands fell.

There is also another legend about Bahuchar Maa. She was the daughter of a nomad, Bapal Dan Detha and while travelling with her sisters her caravan was atacked by Bapiya, a bandit. Bahuchara and her sisters decided to commit tragu and cut off their breasts and she cursed Bapiya. Bapiya became impotent. He was advised to worship Bahuchar if he wanted to have the curse lifted. He dressed as a woman and worshipped her. This is one reason why Bahuchar Maa is also the patron saint of the hijras in India. Shree Bahuchar Mata temple is also significant from another aspect. Couples who desire a child pray to her in hopes of having their wish fulfilled. The temple is also the destination where Babri or tonsure of the head of children, a grand religious ceremony, is conducted.

There are other stories about how Bahuchar Mata appeared to kill Dandasur demon, her first appearance. The second time was seen Kapil Muni prayed to her and she appeared before him. The third time she put in an appearance was when shepherd boys cooked rice to be offered as Prasad to her and a king and his troops appeared on the scene. They challenged the boys to serve food to the army. The boys dipped into the earthen pot and the never ending supply of rice satisfied the whole army. The fourth time was during the reign of King Vajesingh of the Solanki dynasty. A daughter was born to the king but he announced that a son was born and named her Tejpal and she was subsequently married off to the King of Patan of the Chavda dynasty. His in-laws discovered his secret. He ran away and sought refuge in the Mataji temple where he saw a miraculous sight of a bitch transforming into a dog and his mare turning into a male horse. He took a dip in the lake and from a female he turned into a male.

The original temple was built around 1783 AD and it is richly carved with pillars, torans and walls according to Vastu shastra. Manaji Rao Gaekwad is believed to have played an important role in the temple construction and some say he built it in 1839 AD. Shri Bahuchar Mata is shown riding a rooster. The rooster was the symbol of the Solanki dynasty that ruled Gujarat at one time so some associate the Solankis with the mataji and her temple.

There are three temples in the complex. One is the Adhya sthan, the second is the Madhya sthan and the third is the main temple with a Bala Yantra of crystal that is worshipped as the goddess. It is of equal importance as Ambaji in North Gujarat. There are smaller shrines dedicated to Shree Neelkanth Mahadev, Shri Ganesh, Shri Narsangveer, Shri Sahreiya Mahadev, Shri Gutaeshwar Mahadev, Shri Kachrolia Hanuman and Shri Chachar. The Chachar temple is in front of the Hanuman temple and there is the temple with the cock house and the seat of Mataji. Abutting the temple is a guest house and kitchen where meals are prepared for pilgrims.

Some believe that the original Bahuchar Mata temple is in Shankhalpur, three kilometres away and, therefore, when they visit Becharaji, they also visit Shankhalpur Bahucharaji mata temple.