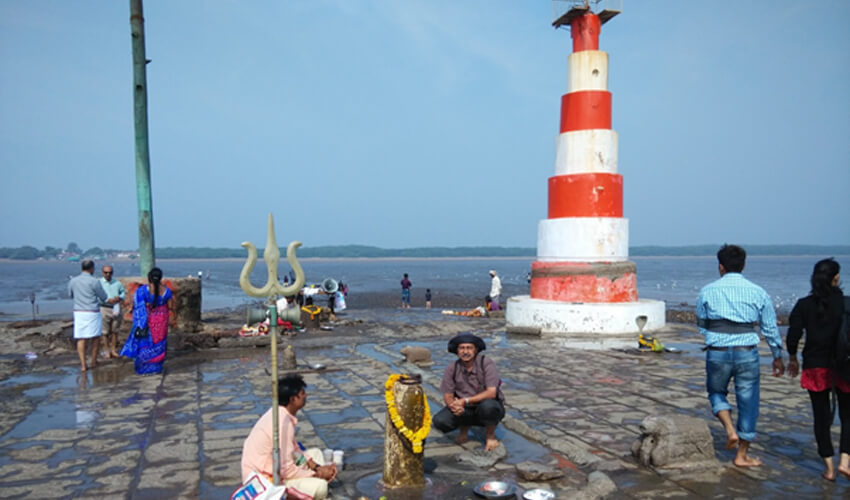 Nishkalank Mahadev Temple Koliyak Bhavnagar is a Lord Shiva Temple Situated in Gujarat State. This is the place where the Pandavas attained piousness after the Mahabharat war.

The beauty lies in its location. It is located 2 km in the waters of the Arabian Sea. Surrounded by the sea, Koliyak Sea Temple Shiva Linga is usually submerged inside the waters.

However, during low tides the Shiva linga becomes visible. The devotees visit the temple by walking barefooted from the shores during the same time period. It is a structural marvel built to withstand the high tides of the Arabian Sea. As per the legend, this temple was built by the Pandavas during the time of Mahabharat. After the Pandavas killed all the Kauravas, the Pandavas wanted to perform repentance for their sins. So as to discover reclamation for their sins, Pandavas met Lord Krishna.

Krishna handed them a Black Flag and a Black Cow. He asks the Pandavas to trail them, saying when both turn white, they all will be forgiven. Krishna also recommends them to apologize to Lord Shiva, after that. The Pandavas followed the cow everywhere it went and conceded the flag. They marched for days, to various places but the shades didn’t change. Lastly, when they reached the Koliyak Beach, both turned white. Pandavas were dignified and sat for apologizing by meditated to Lord Shiva.

‘Nishkalank’ means being spotless, clean, and innocent, etc. Pandavas settled down the Nakalank Mahadev on Amavasai i.e. no moon night of the Indian calendar month Bhadra.

To mark this important event, the Pandavas then established the Nishkalank Mahadev Shivling. The Shiva Linga was established on the no moon (Amavasya) of Bhadarva month of Hindu Calendar.

The famous fair popularly known as ‘Bhadarvi’ is held on the new moon night in the month of Shravan, as per the Indian calendar. An idol of god Shankar was established in an island, over the sea about 3 km to the east of Koliyak.