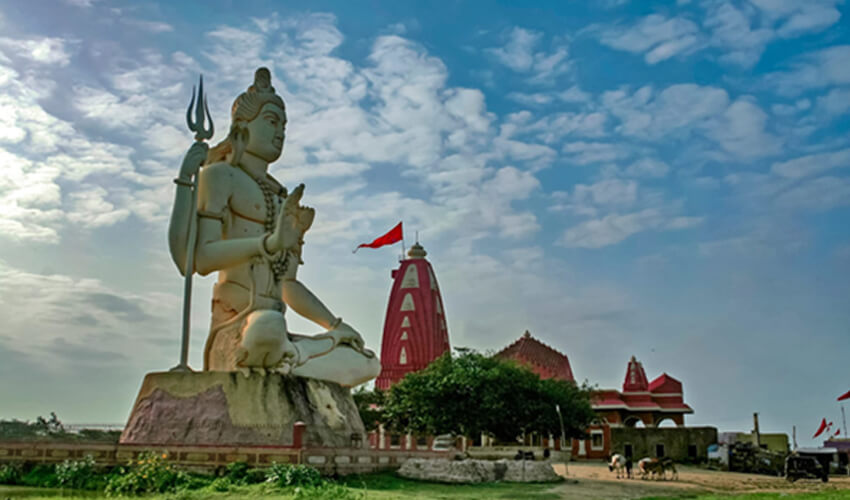 Located on the route between Dwarka city and Beyt Dwarka Island on the coast of Saurashtra in Gujarat is this important Lord Shiva Temple. It is enshrined by one of the 12 swayambhu (self-existent) jyothirlingas in the world, in an underground sanctum. A 25 m tall statue of a sitting Lord Shiva and a large garden with a pond are major attractions of this rather serene place. Some archaeological excavations claim five earlier cities at the site.
Nageshwar was believed to be known as ‘Darukavana’, which is an ancient epic name of a forest in India. Below are two well-known legends attached to this mystical temple:
According to the first legend, ‘Balakhilyas’, a group of dwarf sages worshipped Lord Shiva in Darukavana for long a time. To test their devotion and patience, Shiva came to them as a nude ascetic wearing only nagas [serpants] on his body. Wives of sages got attracted to the saint and went after him, leaving their husbands behind. Sages got very disturbed and outraged by this.They lost their patience and cursed the ascetic to loose his linga [one of the limited meanings is Phallus, but it has has a deeper theistic symbolism]. Shiva linga fell on the earth and the whole world trembled. Lord Brahma and Lord Vishnu came to Lord Shiva, requesting him to save the earth from destruction and take back his linga. Shiva consoled them and took back his linga. [From Vamana Purana CH.6th & 45th]. Lord Shiva promised his divine presence in Darukavana as ‘jyothirlinga’ for ever.
Another story goes hundreds of years ago in the Shiv Purana, about a demon couple named Daruka and Daruki, after whom was named Daruka Van (forest), later known as Dwarka. Daruki was a devotee of Parvati and was blessed by her. He misused her blessings and tryranized the local folks. One day he captured a Shiva devotee called Supriya who was one of the pilgrims on a boat. The demon imprisoned her along with several others at his capital Darukavana. Supriya advised all prisoners to recite the Shiva mantra ‘Aum Namaha Shivayay’ to protect them. When Daruka came to know about this he ran to kill Supriya. Instantly Lord Shiva appeared in the form of a jyothirlinga from the earth. He could not kill the demon who was blessed by his own wife, Parvati, but he assured Supriya that he would protect him in the form of a linga. The linga here thus came to be revered.