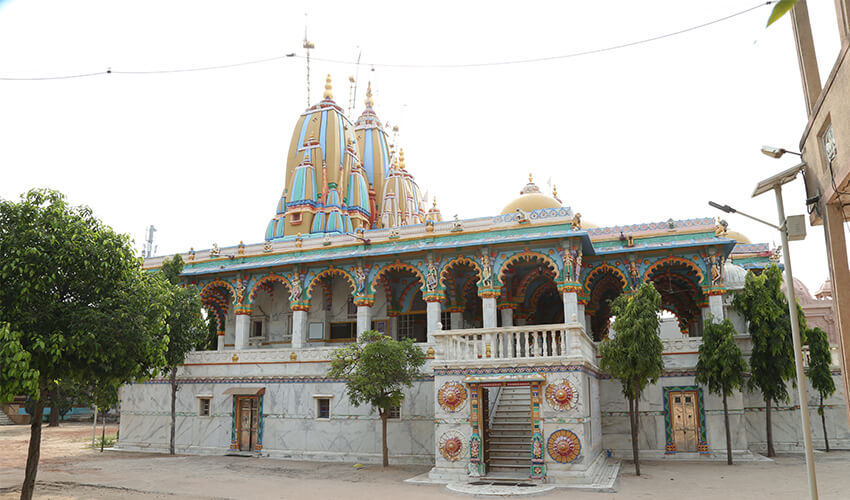 It is the belief of the people that Dholka city was established by the lord Krishna. The real name of this place is Dwarika. This place is having its existence in the sacred Hindu book, Mahabharata. It got its name and existence through three people, Gunatitanand Swami, Bhagwan Swaminaryan and Paramhans. This newly constructed temple is located on a highway. The land and other area around the temple were sponsored by Balkrishnabhai who is from USA. He convinced Swami Shri to construct a temple in his hometown way back in 1977. After this, Swami Shri was ready and it was decided to construct it there. Many Satsang and other devotional events were organized and under a span of two years, the temple was ready for the devotees. There were many cultural events were organized from time to time through which devotees from different parts started coming here.

There many image installation ceremonies along with some Yagyas were organized to serve to devotees coming here.

This is the temple located at Dholka. The statue of MORLIMANOHARDEV HARIKRUSHNA MAHARAJ was established by Lord Swaminarayan himself. This temple is one of that 10 DHAMS called in SWAMINARAYAN SAMPRAYAD. Lots of people from town and nearby villages come here to visit and pray. They also take PRASAD on that day in the temple which is made by cook of the temple. Approximately 200-500 people take PRASAD on the day of POONAM.

There is also one beautiful UTSAV held every year in the month of  DHANURMAAS(Approximately December in english month) called SHAKOTSAV. In this UTSAV PRASAD of Brinjal is made along with BAJRI NA ROTLA, KHICHDI, KADHI and Buttermilk. more than 500 people take PRASAD on that day.

There is also the anniversary of Temple called PATOTSAV in Religious language.