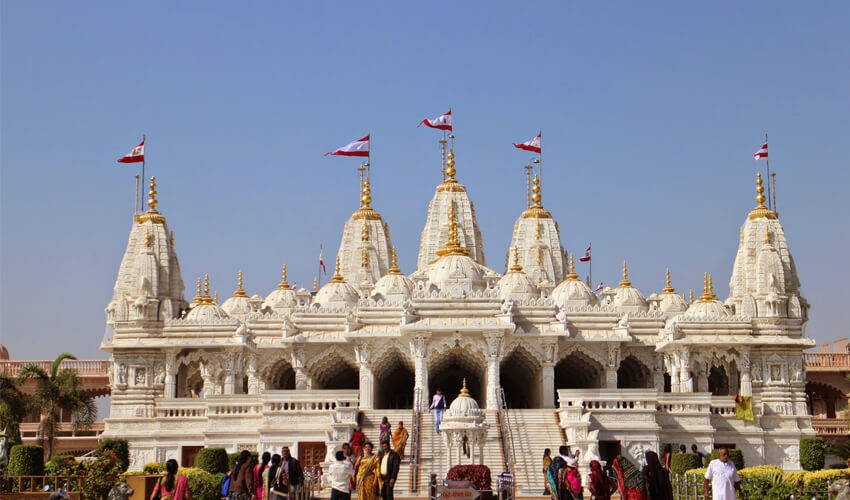 The Swaminarayan Temple of Bhuj is one of the most magnificent temples you will ever come across in this part of the country! Since its first brick installation ceremony on 7 May 2003, it has taken 7 years for its completion. Based on a grand podium, the new temple faces East and is constructed mainly with pure high quality marble.

Expanding a 35,000 sq. feet area, this Temple has 7 sky touching pinnacles. It consists of one central dome, 25 minor domes and 258 pillars. The peripheries, which are beautifully carved into the icy marble of Makrana and Ambaji, give it heavenly beauty, serenity and the divine approach to the temple.

The Gujarat Earthquake of January 2001 destroyed much of the city of Bhuj, including the side of the temple facing north which was built by Lord Shree Swaminarayan. Miraculously the divine idols remained as they were, without any damage whatsoever. With the previous temple being destroyed in the earthquake, this newly built temple boasts of massive architecture with beautiful carvings & design. The fact that the entire temple is made of Marble & Gold further adds up to the grandeur of the temple. It also boasts of a wonderful 3D film which depicts the life of Lord Shri Swaminarayan.

We at kutchtourguide.com are your best choice for planning a visit to the bhuj swaminarayan mandir! Our local guides have rich knowledge of various aspects of the swaminarayan sect & the temple which will enable you not only to view the swaminarayan temple but also to experience it!